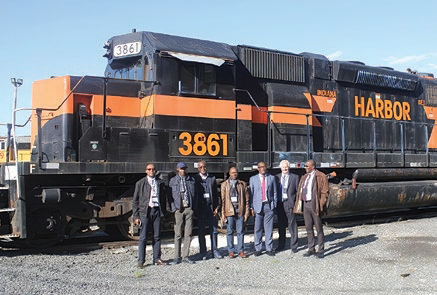 When President Alassane Ouattara of Côte d’Ivoire met with USTDA in 2017, the Agency agreed to take a closer look at the economic turnaround taking place in his country and across West Africa. From energy to telecom to transportation, USTDA recognized substantial opportunities for American companies. The Agency also identified a new partner that was investing in Côte d’Ivoire success: SITARAIL.

To propel investment and modernize its infrastructure, Côte d’Ivoire has partnered with the private sector, laying the foundation for greater regional connectivity. These partnerships include closer relationships with U.S. companies that are providing high-quality transportation solutions capable of moving goods and people across the region.

To help solidify and strengthen these relationships, USTDA hosted a delegation of rail officials from Côte d’Ivoire to introduce them to leading U.S. locomotive engine manufacturers and equipment suppliers. In alignment with SITARAIL’s equipment needs, USTDA designed an itinerary featuring stops at small and large companies in Chicago, IL, Dallas, TX and Atlanta, GA, introducing the delegation to American products and ingenuity. The visit also highlighted the opportunities that exist for U.S. companies across West Africa.

During the visit, the delegates met with a host of U.S. companies, including Amsted Rail, Wabtec Corporation, Trackmobile and National Railway Equipment Company. They also participated in site visits to Indiana Harbor Belt Railroad and the CenterPoint Intermodal Facility in Chicago. The itinerary allowed the delegation to see the manufacture of quality equipment, as well as to visit facilities that were utilizing that equipment.

The investment in new locomotives will increase the profitability of SITARAIL’s broader investments, including its efforts to upgrade the railway network between Abidjan, Côte d’Ivoire and Ouagadougou, Burkina Faso. SITARAIL launched these efforts at the end of 2017, with both countries’ Ministers of Transport coming together to celebrate the revitalization of rail connectivity in the region.

The overall investment — which is estimated to exceed $450 billion — will involve rail replacement, upgraded safety systems and other renovations needed to ensure a strong rail network, supporting the transport of over 5 million tons of goods and 800,000 passengers annually.