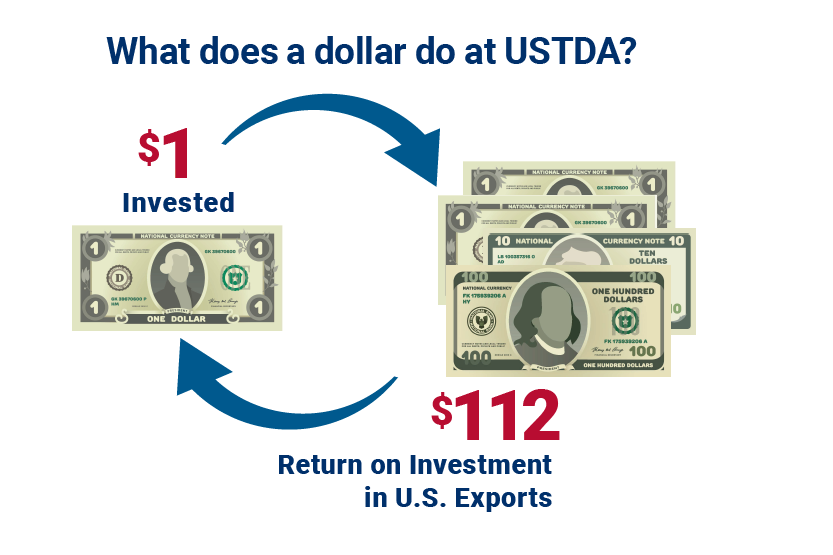 Arlington, VA – Today, the U.S. Trade and Development Agency announced another record-breaking return on its investment and the highest since its founding in 1992. USTDA is now generating an average of $112 in U.S. exports for every dollar the Agency invests in its infrastructure projects within emerging markets.

“As the world faces daunting challenges, USTDA has remained focused on not only meeting its mission, but also setting a new and better standard,” said Todd Abrajano, Chief Operating Officer and Head of Agency. “We are extremely proud to have extended our return on investment to its highest-ever level and confident that the future holds even more promise.”

Since 1992, USTDA’s programming has helped generate more than $74 billion in U.S. exports. As the U.S. government’s project preparation agency, USTDA advances a diverse portfolio of projects in response to the demands of its stakeholders.

Additionally, USTDA announced it has identified more than $1 billion in U.S. exports in FY2020 in key sectors, including agribusiness, energy, healthcare, information and communications technology and transportation. USTDA strategically facilitates these export opportunities for U.S. companies while supporting sustainable infrastructure development in dynamic markets all around the world.

“Our Agency is ideally positioned to expand its partnerships in priority regions and continue to support critical infrastructure projects in its sector areas of focus,” said Abrajano.

To learn more about USTDA and how you can partner with the Agency, please visit www.ustda.gov.