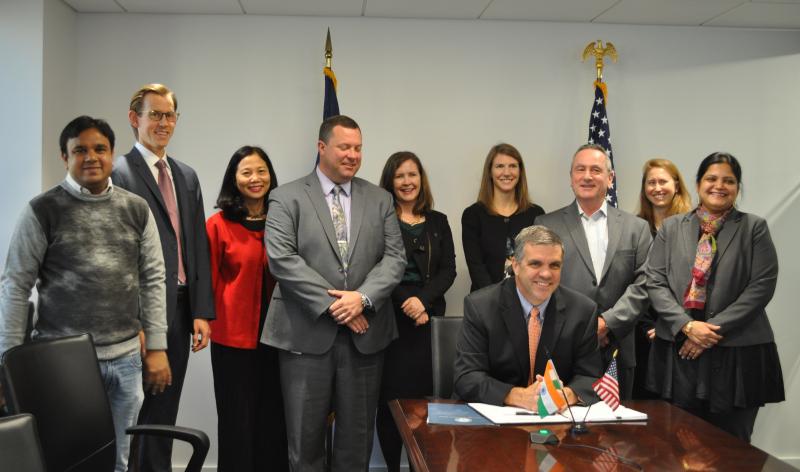 Arlington, VA – The U.S. Trade and Development Agency signed a grant supporting the Airports Authority of India’s efforts to advance the safety and effectiveness of the National Airspace System. The Boeing Company (Seattle, Washington) will carry out the technical assistance, which will create a ten-year roadmap to enhance communications, expand existing systems and airspace capacity, and invest in navigation and surveillance/air traffic management.

Over the last decade, India’s aviation sector has grown exponentially, with an 18% increase in passengers from 2016 to 2017. This rapid growth has created congestion for India’s National Airspace System, and the project will help reduce congestion and allow India to meet increasing passenger demand.

“USTDA is pleased to partner with AAI and Boeing on improving safety and reducing congestion for flights in India,” said USTDA’s Acting Director, Thomas R. Hardy. “At the same time, this project will create market access for high quality U.S. exports that can advance India’s aviation goals.”

“India recently celebrated 50 consecutive months of double digit growth which is still continuing,” said Chairman, Airports Authority of India, Guruprasad Mohapatra.  “This growth has brought with it the challenge of maintaining safe and efficient aircraft operations.  Hence, it was decided to draw a robust roadmap for sustained ANS infrastructure to meet the growth challenges in a planned way.  We have entered into a grant agreement with USTDA, under which Boeing will provide the technical knowhow to develop a future roadmap for smoother and efficient skies.”