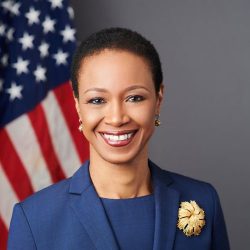 Enoh T. Ebong is the Director of the U.S. Trade and Development Agency. Nominated by President Biden to serve as USTDA’s Director, she was confirmed by unanimous consent of the U.S. Senate. As Director, Ms. Ebong leads USTDA in its efforts to develop sustainable, clean infrastructure and foster economic growth in emerging economies, while also supporting U.S. jobs through the exports of U.S. goods and services.

Ms. Ebong assumed the helm at USTDA after starting her public service at the Agency and rising through the ranks in several roles as a career civil servant, including as General Counsel and as Deputy Director/Chief Operating Officer. As Deputy Director, she led the development and execution of USTDA’s international program and oversaw all agency operations.

Ms. Ebong’s professional experience includes time in the nonprofit sector, where she served as the Head of Strategic Partnerships at the Milken Center for Advancing the American Dream, with responsibility for driving the development of strategic partnerships to expand access to education, health, financial empowerment and entrepreneurship.

Ms. Ebong has served on the Boards of the Friends of the National Zoo and the Washington Foreign Law Society. She has also served as an Advisory Board member of Lawyers of Color, which named her to its 4th Annual Power List in 2015; and as a Global Faculty Lead for Atlas Service Corps’ Global Leadership Lab.